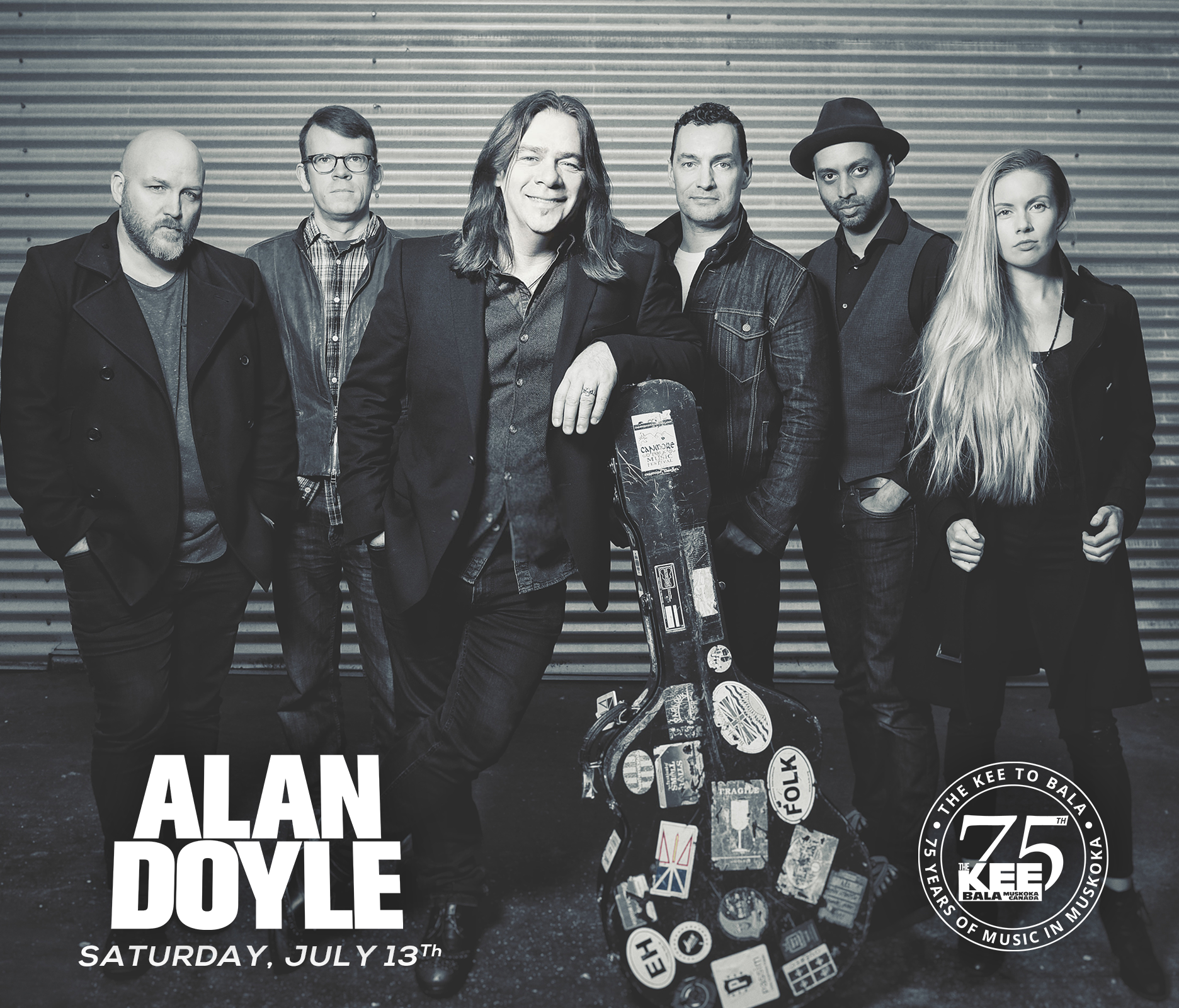 Announcing Alan Doyle will be performing live at The KEE to Bala, Saturday July 13th!!

Alan Doyle chalks up a lot of where is he right now—with both his third solo album and his second book released in October 2017—to luck. “I’m the luckiest guy I’ve ever even heard of,” he says. “This was all I ever wanted, a life in the music business, singing concerts. I was lucky to be born in the family I was, in Petty Harbour. I was lucky that Sean, Bob and Darrell found me and asked me to join their band. I was lucky the Canadian music fans were into it.”

And yet, one listen to A Week at The Warehouse makes it plainly clear that there’s a lot more than luck at play in this decades long, awards-studded career. This album, recorded live off the floor with Doyle’s “beautiful band,” as he calls them, with producer Bob Rock at the helm, is chock-a-block with country-tinged, radio ready tunes that bring with them the flavour of some of Doyle’s favourite artists, from John Mellencamp to Rock’s own band, Payolas (In fact, Doyle covers a Payolas tune on this album, Forever Light Will Shine, with that band’s singer, Paul Hyde appearing as a guest vocalist.)

In addition to Rock’s work with Payolas, Doyle loved the metal albums Rock produced in the eighties, and his more recent work with the Tragically Hip, Jann Arden, and others. “It’s a real treat to get to meet your heroes and they turn out to be nicer than you ever imagined,” Doyle says. “A couple things about Bob, he’s first of all, still a massive fan of a good song, for a man who’s seen hundreds and thousands of them, he’s still thrilled to get a chance to work on a good song with a good band in a good studio, that’s still a perfect day for him. And secondly he’s just a wonderful motivator to get great players to play at their best.”

That kind of ease and experience—plus the incredible talents of Doyle’s touring band—made recording A Week at The Warehouse a relative breeze. Of the band, Doyle says, “I am so by far the worst person. I wish I was being modest. They’re an incredible band to sing with every night. I look around the stage and I can’t believe my luck.”

Doyle’s desire was to have an album that sounded and felt like the live show, and A Week at The Warehouse does just that. Lead single Summer, Summer Night is a co- write with long time collaborator Thomas “Tawgs” Salter. Doyle had it in mind to write a Celtic country song about summer nights in Petty Harbour when he was a young adult, playing guitar and singing with his friends around a bonfire on the beach—and teaching his friend Jimmy to play “one song, he figured he could get that one girl to go out with him. I showed him how to play Dirty Old Town and if memory

serves correctly it was very successful. It’s a fun song about letting yourself go the way you could when you were that age.”

Then there’s the ukulele and whistling ditty Beautiful to Me, also co-written with Tawgs Salter. This one, Doyle says, is a response to an attempt in North Carolina to limit the access trans people have to bathrooms in schools. “I was drawn to write a song that told people on the outside that they were certainly welcome in my place,” Doyle says. “If you’ve got love in your heart, that’s all that matters to me. It’s such a simple little song. It’s gentle. I just want everyone to know that if you feel like you’re on the outside, you’re not on the outside in this group—my arms and doors are open wide.”

In effort to balance the sound of album with something more rooted in Doyle’s own history, he dug out an older tune, one he’d written for the Robin Hood film in 2010. Doyle remembered the film had used the chorus and parts of two different verses ofBully Boys, but he couldn’t remember which. So he took to YouTube, hoping to find the scene. “I found dozens if not hundreds of versions of that song, from Spain, Croatia, China, the UK,” he says, astonished. “People have written their own verses in the old traditional way, it has made its way around the world as a sea shanty. It’s the old way of spreading a folk song, but using the Internet.” Doyle knew he had to finally record the song himself.

And there’s more of Doyle’s history in Somewhere in a Song, a tribute to his parents, who “made us feel like we could handle anything life gave to us,” Doyle says, adding he didn’t realize till he was an adult that his family had been poor. The song’s opening line is one Doyle heard his father say, when someone asked how the elder Doyles had gotten together. “My father said, ‘that’s simple I suppose, she could play and I could sing.’ It’s a simple homage, a celebration of my mom and dad’s attitude that you spend exactly none of your time worrying about the stuff you don’t have and exactly all your time making the most of what you do have.”

“I still think of myself as a person that has one job, a guy who plays in a band for a living, that’s me. If someone asks me to write songs, I guess I’m a songwriter too. If someone asks me to produce a record for them, then I guess I’m a record producer too. I never looked for an acting job in my life—they come to me. Someone calls who needs a hairy, Irish-looking fellow to bully someone or play the lute, come throw rocks at Colin Farrell, okay, sounds fun. It’s a laugh. Books came to me the same way, Random House said, we’ve been reading your blog, why not write a book, so I thought okay!” There’s more to it than all of that, for certain, but Doyle parries it off, in his usual way. “I’m grateful to do all of it. It’s a wonderful life and I’m very lucky to have it.”