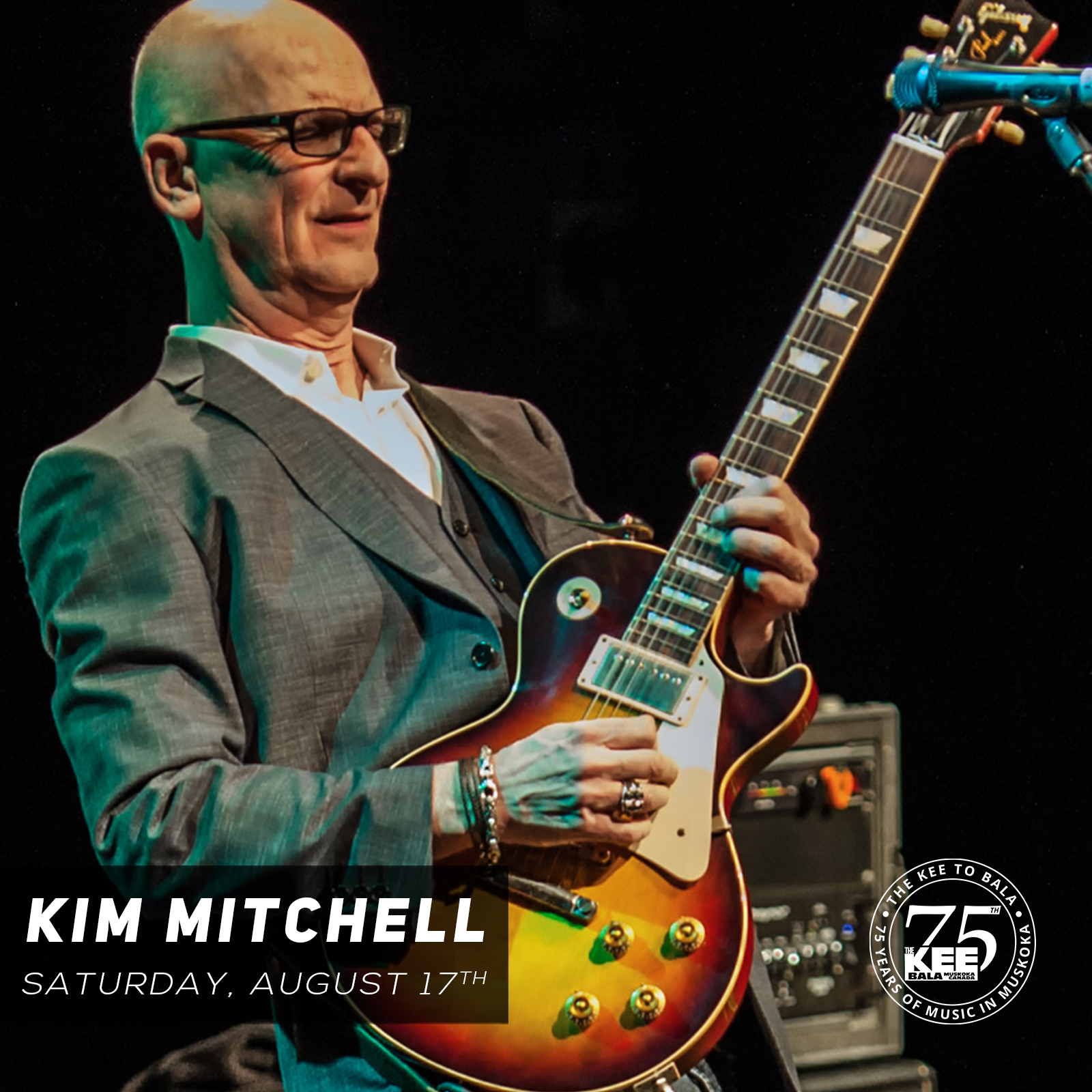 Presenting another great night with Kim Mitchell at The KEE to Bala Saturday August 17th, don’t miss your chance to see this Canadian Rock legend live in concert… advanced tickets are on sale NOW!!!

Canadian rock icon Kim Mitchell sings those lines on his personal mission statement, “Rock N Roll Duty” and he’s still doing exactly that, energy and enthusiasm intact. For Mitchell, that’s what it’s all about, not the money, the fame or the trophy case.

Singer-songwriter and guitarist, Kim Mitchell, has achieved gold and multiplatinum sales status over a long and storied career, starting early on as leader of the musically eclectic Max Webster, a band who in the late 70’s defined “alternative” and “independent” long before the words became clichés. Mitchell has sold over 1.5 million recordings and toured regularly over a lengthy solo career that remains creatively vibrant to this day. Of note, 2014 marks the 30th anniversary of “Akimbo Alogo” (Alert Records), Kim’s first full length solo recording post Max Webster, a record which introduced us to Kim’s big, bold and endemic guitar driven sounds in songs like “Go For Soda” and the anthemic “All We Are”.

Along the way he won three Juno Awards for “Most Promising Male Vocalist of the Year”, “Album of the Year” and “Male Vocalist of the Year”. In the late 70’s and through all of the 80’s Kim toured the largest arenas in the country and today continues to perform at festivals, casinos and Performing Arts Theatres nationally. He is a gifted and peer-respected guitar player as well as an acclaimed songwriter, having penned (in partnership with Pye Dubois) and recorded classic hits like “Go For Soda”, “Rock N Roll Duty”, “Patio Lanterns”, “I am a Wild Party”, “Easy To Tame” and “All We Are”, to name just a few – all songs that have become part of the Canadian musical landscape.

Add several new songs from his most recent solo recording “Ain’t Life Amazing” (including the national rock radio hit of the title track), and audiences are thrilled to find that participating in a Kim Mitchell concert is like being at the live recording of a greatest hits box set which includes his solo hits and often  Max Webster gems like “Diamonds Diamonds”, “Oh War”, and “Battlescar”, a hard rock anthem as poignant  today as it was three decades ago when it was recorded with his friends Alex, Geddy and Neil of RUSH.

In 2004, while maintaining a busy touring schedule, Mitchell was invited to join the on-air staff at the CORUS flagship station Q107 in Toronto, giving Kim his first ever day-job and one that he has excelled at. During his tenure as host of their afternoon drive show, quickly becoming one of the most popular DJs in the GTA, and the country. July 31, 2015 marks the end of an 11 year journey hosting The Kim Mitchell Show.
Mitchell has the respect of peers, fans, and industry types alike. Just what does he consider his greatest achievement? “Shoot, that’s easy,” says Kim, “it’s in the couple of hours the band is onstage, being able to take people to a special place through our performance and music. When that happens, I’ve accomplished what I set out to do.” Legions of Canadian fans agree!

Kim Mitchell; guitarist, singer, songwriter, broadcaster. A talented, imaginative rock guitarist and a pop songwriter of considerable craft, Kim Mitchell has been a fixture on the Canadian music scene since the mid-1970s. He began as the manic front man of the quirky, progressive hard rock band Max Webster, and gained prominence as a solo artist in the 1980’s. He later established himself as a popular radio personality and a mainstay on the summer festival circuit.

Peter Fredette has been with the KMB since 1983. Playing guitar, keys, drums, and currently mainly bass. Peter sings backing vocals on all KMB recordings with a feature vocal in the song “All We Are“

A drummer from the very beginning, Dave Langguth cites Elvis and Buddy Rich as some of his earliest influences. His first instrument was a snare drum – a gift from his uncle – but Dave soon graduated to the drum set in the first grade.
He attended the Berklee College of Music, studying with Victor Mendoza, John Ramsey, Skip Hadden and Ed Kaspick, and in 1993 following his studies, he moved to Halifax and broke into the scene with such artists as: Dutch Mason, Brett Ryan and Wayne Nicholson. 5 years later, Dave found himself living in Toronto performing with the likes of: Sass Jordan, Alannah Myles, The Kings, Rik Emmett, Grammy award-winning pop star Nelly Furtado.

Born into a musical family, Sam Pomanti has been around keyboards for his whole life. Learning music from his favourite video game by ear as a kid launched him into music, and from there he started learning songs by Stevie Wonder, Gino Vannelli and Steely Dan. Though only 22, Sam has released two albums under his original projects Kitsuna and Moonhead, and performed with the likes of Mike Stern, Ed Sheeran, Nikki Yanofsky, John Scofield and Scott Helman.