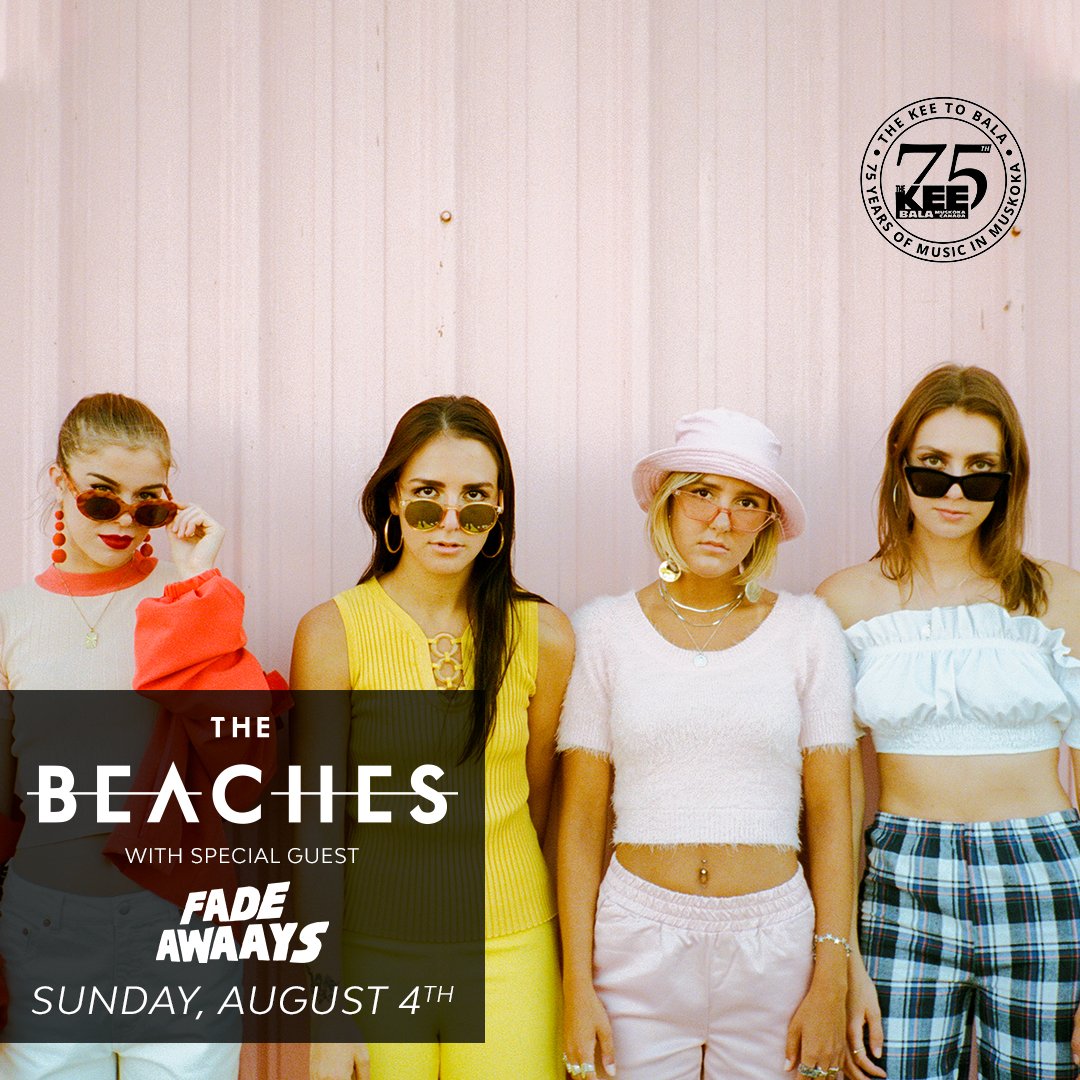 Advanced ticket’s are on sale NOW!!!

Toronto-based band The Beaches are a little bit glam rock and a little bit garage. They’retremendously warm cool girls with an infectious edge—the kind you’d want to introduce to yourparents and then sneak out and party with.

However you break it down, The Beaches are 100% rock and roll.

Comprised of sisters Jordan and Kylie Miller (on lead vocals/bass and guitar, respectively), Eliza Enman-McDaniel on drums, and Leandra Earl on keys and guitar, the band has a natural kismet that shines through on each of their tracks and in their live performance. Their songs flow with unparalleled ease, headbangers with resonance.

Truly the best of friends, their writing sessions are entirely organic. They’ve been playing as aband since their early teens, and it shows. Each band member brings something unique to the table, resulting in songs that walk the fine line between being a heavy hitting gut punch and a hell of a lot of fun. In fact, according to Leandra, they sometimes have too much fun writing:“Jordan and I will sometimes get into our own zone and write our Dracula rock opera,” she says, totally serious. “The others have to get us back to working on the sound.”

Loaded with killer guitar riffs and poignant lyrics, it’s no wonder that The Beaches’ two self-released EPs caught the attention of iconic label Island Records, to which they’re now signed.

Being an all-female group certainly sets them apart from the male-dominated rock world, butthere’s a collective, visceral eye roll at the suggestion of being called a “girl group.” “It’s one of those things where you wish you didn’t have to mention it,” says Eliza, sighing. “It makes us unique, yeah, but we shouldn’t have to define ourselves as a female rock band. We’re a rock band.” They’re excited at the prospect of inspiring other young women to join bands, but it’s not why they play. “We’re not doing this to be role models,” says Kylie. “We’re in this band becausewe love to play together and we love music.”

Their love of rock and roll is obvious; with wide-spanning influences including Nirvana, The Strokes, Amy Winehouse, St. Vincent, FIDLAR, and Blondie, their songs translate easily to live shows, connecting with any kind of audience. Their first single on Island, “Give It Up,” is ahard-hitting, reverb-heavy anthem that calls for change in any context. “It’s not about giving up anything,” says Jordan, whose vocals on the track call to mind the Yeah Yeah Yeahs’ Karen O ather grittiest. “It’s more about just needing something to change.”

From touring the UK, to playing Canadian festivals like Osheaga and Wayhome, to opening forEagles of Death Metal, a lot has certainly changed for The Beaches over the past two years. “It’s

been really exciting,” says Kylie. “We’ve been evolving a lot and growing as people, writers, and performers.”

Performing is particularly important to The Beaches, who can’t wait to play their new music live. “Onstage you get to let go of all your insecurities and channel a purely confident person,” says Jordan. “You get to be really free.” Eliza agrees, adding, “It can be like therapy. Sometimes you can just focus, forget the crowd is there, and just be so in the moment doing what you do best.”

“And if a boy would like to date any of us,” says Leandra, only half joking, “we’re all for it.”