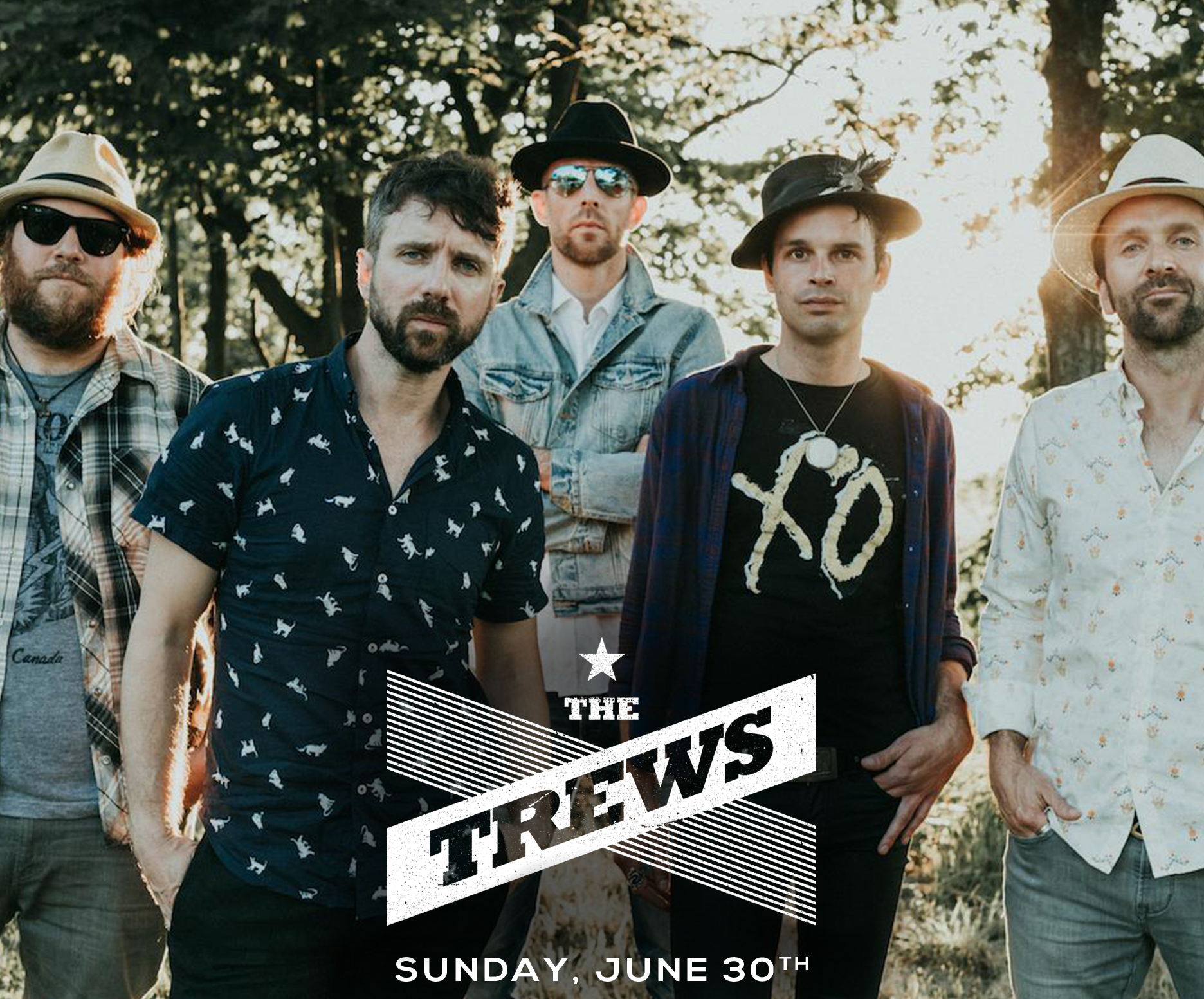 We’re please to welcome back The Trews – Sunday June 30th

Advanced Tickets are on sale now!!!

You’d think a celebrated veteran band like The Trews — with countless radio hits, ecstatic fans from Dublin to Des Moines plus multiple EPs, a pair of live albums and a retrospective — would regard studio album number six as a cinch.

After all, it’s their career equivalent to Led Zeppelin’s Physical Graffiti or REM’s Green, the Beatles’ Rubber Soul and The Tragically Hip’s Phantom Power; the apex of decades-long musical ingenuity arriving at a juncture where there is nothing, truly not one thing, left to prove.

Yet you’d be dead wrong. In what can only be described as a rage against stasis, The Trews approached Civilianaires, their electrifying and wildly original follow-up to 2014’s The Trews, the way a contractor tackles a kitchen reno:  tearing things down to the studs, then building out piece by new piece.

“We’re almost in existential-crisis-mode if we don’t have new songs we’re excited about,” guitarist/songwriter John-Angus MacDonald howls on behalf of singer/songwriter Colin MacDonald and bassist Jack Syperek. “With us it’s always ‘What’s next?’ We’re most galvanized while we’re creating. And this new album is a completely fresh take on what we’ve done before.”

Which is not to suggest Trews fans will be bewildered by the towering and multifaceted songs on Civilianaires. Dazzled is more like it, though #jawhitsfloor will doubtless trend when heads wrap around tracks like the seething, staccato, and synth-goosed corker “Harder To Love,” “Is It Too Late” — a sombre, almost hymnal anthem buoyed by piano and a choir — and the cheekily poetic “Bar Star,” its gargantuan chorus described by John-Angus MacDonald as the band’s best ever.

Coming from the rock and roll bruisers who delivered the absurdly sticky “Rise In the Wake,” “Beautiful & Tragic,” and “Hold Me In Your Arms,” that’s a whale of a claim. But nothing about Civilianaires scans as even remotely garden-variety.  It’s almost as if the new album leveraged all the obsessive musical minutiae the band has been stockpiling in its collective noggin since their kiddo days playing together in small-town Nova Scotia. (They now call the fast-rising cultural hotbed of Hamilton, Ontario home).

And it’s not just the sonics that are soaring. The lyrics on the year-in-the-making Civilianaires also carry gravitas, as evidenced by the blistering agit-prop rant (and bona fide rock-radio hit) “The New US,” which takes aim at a certain orange-hued world leader, a.k.a. “the little man who isn’t home, his little hands arm the drones.”

Indeed. Still, if there is an overarching takeaway from Civilianaires — apart from the fact that it’s a head-spinner from start to finish — it’s that The Trews were fearless in confronting potential creative inertia, even if that meant discarding a proven jam-to-studio method that has so far earned near-universal critical acclaim and a heap of prestigious gigs with the likes of the Rolling Stones, Robert Plant, and Bruce Springsteen.

“This whole process just felt exciting to us,” John-Angus MacDonald offers of Civilianaires’ bold creation. “The record sounds like now to us, and when the songs come as easily as these ones did, you know you’re onto something.”

The dawn of The Trews Version 2.0 can be traced to 2016 and the arrival of Time Capsule. The band had some misgivings about issuing a greatest hits album despite its serving as a handy snapshot of their excellent output to date while adding four new songs that foreshadowed the prismatic intensity of Civilianaires.

Fate swiftly intervened to ensure that wasn’t in the cards. “We had lots of material, but we just couldn’t focus,” Colin MacDonald says. “We demoed some stuff with (Arkells mainman) Max Kerman in early 2017 (‘Is It Too Late,’ ‘Vintage Love,’ and ‘Jericho’) then we went on tour with Weezer.”

“By summer 2017 we were in Vancouver with Bob Rock fully intending to do a good portion of the record with him,” John-Angus MacDonald continues, noting that the band had met the super-producer (credits include Aerosmith, The Cult, Bon Jovi, Mötley Crüe, Metallica) at South by Southwest in 2016 and kept in touch.

But for various reasons, The Trews demoed only four songs with Rock at the fabled Warehouse studios, owned by Bryan Adams: “Leave It Alone,” “Amen,” “Civilanaire” and bonus track “Way Too High,” the latter two co-writes with singer/songwriter Serena Ryder who Colin MacDonald credits with teaching him the ineffable power of singing softly, a newfound technique that propels Civilanaires’ title track and the sparkling “No More Saying Goodbye.”

“We were keen to do something different,” John-Angus MacDonald says of the Kerman and Rock sessions, “but nothing we did to that point felt different enough.”

Enter Matthew Vlahovich, A&R man at Cadence, The Trews’ new record label. “Matthew is what we’ve always wanted in an A&R man, and as a onetime singer/songwriter in Young Empires, he knew exactly what it was like to be on the other side of the equation. He introduced us to Toronto producer and musician Derek Hoffman. And that changed everything.”

Says Colin MacDonald: “I can tell you we were sceptical at first. Derek is quite a bit younger than us and doesn’t have a huge track record. But we agreed to do one session at his Fox Sound studios to see what he had. And that one session yielded ‘Time’s Speeding Up.’

“One of the great things you learn in the business over time is how to spot talent quickly. Derek just had an abundance of talent,” Colin MacDonald continues. “And we said to ourselves, ‘We didn’t come this far to overlook this feeling.’ We followed our gut. We did, like, two sessions with him before Christmas 2017 and a few more in mid-January 2018, and the record was done.”

By that point, The Trews had also permanently added drummer Chris Gormley (ex-Big Sugar) who quickly distinguished himself as an exceptional songwriter as well as a musician: “We wrote [the knock-kneed, horn-driven] ‘Up Sweet Baby’ with Chris at my house last summer,” John-Angus MacDonald says. “His contribution was invaluable.”

“Our approach this time out seemed counterintuitive and yet it worked,” Colin MacDonald adds. “For example, my friend Brett Emmons from the Glorious Sons suggested I go through the head-clearing journals I’ve been compiling since about 2014 to see if there was anything that could be turned into a song. So last summer, I started highlighting random lines, which yielded a bunch of lyrical sparks that we developed into songs, like ‘Bar Star’ and ‘Time’s Speeding Up.’ Never done that before.”

As well, the MacDonalds marvel at how the writing and recording with Hoffman — who they say engaged the trio in a series of barrier-melting “thought experiments” in the studio — happened virtually simultaneously and wholly collaboratively.

Meanwhile, amid that invigorating creative burst, the band also inked a new management deal with heavyweight New York firm Gold Village Entertainment, helmed by legendary music executive Danny Goldberg.  Now, with new representation, a new label, new drummer and a brilliant new album in the can, The Trews are ready for their proverbial close-up… some 15-odd years after they began.

“REM was such an inspiration for us,” John-Angus MacDonald says. “Every record was an adventure.  That’s what I love about rock and roll. It’s pretty simple — drums, bass, guitars — yet you have to go into the wilderness of creativity to find something new and bring it back.

“That’s what making Civilianaires felt like to us. In some ways it feels like we’re taking a calculated risk, but we also believe we’re sitting on some of our strongest songs ever. And we are all really proud.”